The under-construction SkyCity Convention Center in Auckland caught fire early last week. The fire has not caused any causalities but authorities in New Zealand have issued a health warning. Emergency officials confirmed on Thursday, 24 October, that the fire was under control.

Thousands have been evacuated at the convention centre. As the fire continued to rage, staff from the famous Sky Tower as well as the casino were evicted from the building. Residents of the city of Auckland have been warned to stay away from the city centre.

It is reported that the fire started on the roof of the Convention Centre around 1 pm on Tuesday, 22 October. The fire continued to burn overnight. There were over a hundred firefighters deployed at the scene with several road closures around the city.

The convention center is owned by SkyCity Entertainment Group, a New Zealand casino operator. The casino was under a construction project valued at just over $700-million. 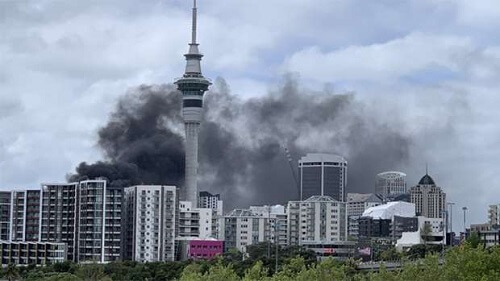 Due to the fire, many businesses around the city centre have been forced to shut down. Some businesses have opted to take legal action against Fletcher, the company responsible for the construction.  Legal expert, Jeff Walter has revealed that there should be insurance in place to handle the damage caused by the fire. Other experts say that if the fire was due to a construction workers’ negligence, then the construction company should be held liable for the damages.

Getting Back to Business

Graeme Stephens, chief executive of SkyCity said that when the fire broke out, the convention centre had been close to completion. Stephens revealed that patron were evacuated before everything else. He said the gaming floor was emptied around 3pm on Tuesday.

Speaking about the financial damage, Stephens stated that the impact will be impossible to outline. He said the fire will definitely cause delays to the opening of the centre. A number of structures and components have been damaged. It is no surprise then that SkyCity shares dropped by late Wednesday morning. The same can be said about the construction company’s shares as well.

Stephens could not clearly state when exactly the convention centre will be ready to get back to business. He did, however, mention that the first conferences to be held at the centre we scheduled for March 2020. It is unclear if the casino will meet the deadline. The centre is also expected to hold the Apec meeting but that too is still uncertain. The convention centres casino will be back in full operation on Thursday, revealed the chief executive.

Executives and authorities will continue to monitor the air quality until things get back to normal.