SkyCity Casino workers have joined the Climate Strike in support of the students in Aotea Square, New Zealand. The SkyCity Union Convenor spoke out against the carbon emissions levels that currently plague the country and hopes the casino can look at its current policies. The workers stand in solidarity with students, collecting votes in a concerted effort to push policymakers to institute measures to reduce the carbon. This strike action follows a previous strike action that the workers took not too long ago. The workers are embattled in a fight for increasing rates on weekends and nights but the casino is not budging.

Joe Carolan, who is the spokesperson for the union was very critical of SkyCity’s policies, despite the casino’s assertions that they don’t have enough money to pay staff. Carolan pulled the thread, explaining that SkyCity’s “latest promotion is to give away a gas-guzzling Lamborghini. So, they will spend half a million dollars to promote climate-destroying gas guzzlers, but apparently there is no money for working nights and weekends. Instead, a few dealers will ‘win’ NZ$100 during the promotion.” 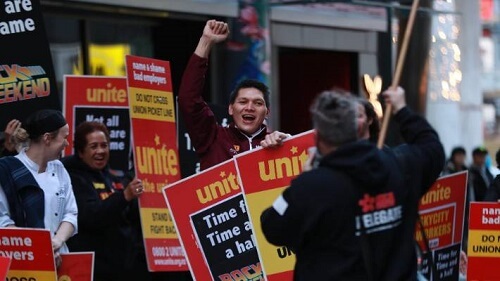 They want real pay increases, not a paid lottery

The SEA-Unite union’s decision to fuse its concerns with the Climate Strike was supported by over 95% members that voted to take strike action. They had undergone a previous strike action for two consecutive days in hopes of better pay. The bargaining discussions haven’t gone to script, with SkyCity’s refusal to adjust rates during weekends and night shifts. The union is steadfast in seeking incentives for workers that work nights and during the weekend. Approximately 94% of the union members agreeing to reject the latest offer by the casino.

Stick around to find out how the story unfolds and more of the latest NZ gambling news at GoldenRivieraCasino.