The Macau gaming industry is responsible for the majority of the tax revenue collected by the Special Administrative Region (SAR). According to the Macau Financial Services Bureau the SAR government is making close to $13 billion. This is due to six casino concession holders.

In 2013 Macau reached its all-time Gross gaming revenue (GGR) mark with a $45 billion win. The government received almost $17.5 billion from slot machines and table games in 2013. Most of the revenue received that year was from casinos.

Through November in Macau, GGR stands at $33.6 billion. This is a 2.4 percent year-over-year decline. Casino win is taxed at a rate of 39 percent. This is for casinos such as Galaxy, MGM, Sands, Wynn and Melco. SJM pays taxes slightly less at 38 percent. It is the company that held a monopoly on casino gambling in Macau. SJM Holdings held a monopoly for 40 years until 2002. 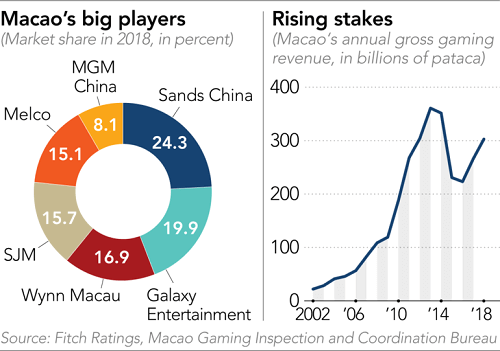 Macau is currently on a mission to reduce its tax revenue dependency on gaming. The Macau Financial Services Bureau reveals that 85.8 percent of all taxes are contributed by casinos in the region. According to the Bureau, through 11 months, the 2019 total tax revenue reached $15.1 billion.

Earlier in 2019, the International Monetary Fund stated that the district is looking to incentivize the six casinos that encourage investments in new convention space and non-gaming attractions. Fu Ziying, Macau Liaison Office Director reiterated the same sentiment. For potential development, Ziying has chosen nearby Hengqin Island.

A yuan-denominated stock exchange is expected to be signed off by the People’s Republic President, Xi Jinping. The new stock exchange is SAR’s wish for Asian businesses to have a physical presence in the region. This will also assist in transforming the casino hub into a financial center.